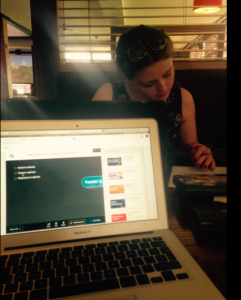 After our meeting with Andrea today, we had the go ahead to speak with members of staff within the chemistry department and implement our ideas as to how Nearpod can be used within the department. A big advantage of using Nearpod in Chemistry, compared to how things are run at the moment, seems to be the attendance record to replace the paper-based registers that are sent round the class each lecture. They can be an unexpected distraction when you are trying to concentrate on something being explained by the lecturer, so straight away we had found a big advantage of using Nearpod in lectures. We discussed the possibility of myself and Courtney meeting with each second year lecturer and showing them how Nearpod can be used, and also helping them to create their first lecture so that they have something to go on to create others, so we will be setting up those meetings in the coming weeks.

I met with the lab manager, Thomas, who had some rather constructive criticism of using software like Nearpod, within an already tightly scheduled teaching laboratory environment. He was keen to make sure the matters he had come across would not discourage me from trying to find a way forward, as there definitely is a benefit to be found, it’s just a case of finding a successful way to implement it. His main encounter was that the benefit must outweigh what is put in through time or money. Some similar ideas he has had in the past have just not been feasible in terms of adding more workloads to an already extremely busy week for many. Another factor is that PhD students in the lab are there to assist and watch over students as they are carrying out their experiments, and if the demonstrators are there giving feedback to any drawings submitted by students then they are not doing what they are originally there for, and it can be hard finding enough PhD students willing to demonstrate as well as able to give enough hours towards the job in the first place.

One idea we came up with was using Nearpod for the online module surveys which are used as an evaluation tool at the end of each academic year. At the moment there is a rough estimate of around 15-20% involvement of students submitting their feedback for this, and even then the most likely people to take time filling out a survey are the ones with a passion for something they’re not happy about. I feel this is not a fair representation on the course and although the lecturer’s performance does not get evaluated in terms of the students feedback, it is much more useful to them if they have meaningful, descriptive feedback that they can use to then alter the course to suit students better, or implement more of the parts students liked in that module. If we were to use Nearpod to carry out the module evaluation surveys, it would be quick and easy for students to give their opinions and the involvement would be much higher as they could do it then and there at the start of their last lecture, or even better have students complete the survey before marking their work, so you are ensured a successful range and quality of feedback, and also 100% involvement.

I left my talk with Thomas feeling more comprehensive of the challenge ahead of us but also well-informed of the obstacles we are more than likely to come across while finding ways to implement Nearpod into the laboratory setting of Chemistry. One major factor as to whether it will be efficient for staff to use is the ease of access to feedback given, and whether Nearpod can mark students answers in the same way that Blackboard currently does. Although I feel Blackboard has a rather outdated feel to it, it is a system that currently does what it needs to and people in general are sometimes reluctant to change to something new when there is a way that is already working. Our advantage with Nearpod is that it can do so much more than it ‘needs to’ to benefit the student, while encouraging them to get involved with the course more as it makes learning more stimulating and also would encourage them to gain a greater understanding, as they are being tested in more ways than just a multiple choice question and answer. I like the idea of students having to draw the correct set up for a piece of apparatus they are going to be using in the lab, or to have to fill in the blanks of the mass of a reactant they will be using. Although we can set the students these questions on paper or in an email, I feel with Nearpod students are more likely to get the work done as it seems more varied and enjoyable, we just need to work out how we can implement this without adding more pressure or complication for the staff members when using it.

The meeting with the chemical education committee was to show them how Nearpod could be used and why it would benefit us as students and staff to use Nearpod in the chemistry department. Everyone there had experience of giving lectures so they could quickly see which parts they thought would work and which parts they were skeptical about. The organic chemists liked the idea of the draw something feature, which I was excited about as I had previously had lots of ideas of how we could use Nearpod to improve organic tutorials, so I will definitely be setting up a meeting to discuss this in further detail. Some were unsure of the real-time feedback being too much of a distraction to the lecture, though I explained that the student input could be viewed and analysed after the lecture has taken place. Although students would not get as much direct feedback from this, the lecturer could still give basic feedback of what the correct answer was supposed to be.

The overall reaction was that there could definitely be a place for Nearpod within chemical education, it’s just a case of training staff how to use it and also whether staff would be confident and willing enough to use it so that students could benefit from the interactive features. Again it is also a case of the benefit outweighing the time and effort put in from staff – in mine and Courtney’s opinion it’s a clear success, though now it’s just a case of showing others that and getting other members of staff on board with us!